A downloadable game for Windows and Linux

Immense Threat is a classic-style adventure platformer in a futuristic setting. The game takes you on a quest to liberate the chickens from wicked Consumers. Currently, the game is in early access demo.

What exactly is this game?

It's a 2D platformer mixed with a shooter - at times you will simply jump from platform to another, avoiding traps. At other times, you're going to confront the enemies. Take aim and fire! Just be mindful - which weapon to use? Maybe conserve ammo and fight bare winged? Or maybe you can simply run right past through? You decide!

So what's the story?

In the future, the evil people, called the Consumers, will rise to power and exploit the livestock to the fullest. But a few chickens will not have that! Join the resistance group and show those Consumers, who the real Immense Threat is!

Anything else? Some features, perhaps?

Think everything is so simple? Well, that's not how the life is, goes double for these brave chickens!

The adventure consists of over 20 levels, riddled with deadly traps and dangerous enemies, along with powerful bosses.

On your quest, you will make use of 18 weapons - from ordinary stones, through pistols and rifles, to plasma guns. To further increase your chances of survival, collect the chicken currency, Middlings, or Midds for short, to buy upgrades between the missions. Also, try to look for secrets to gain additional advantage!

Feeling confident? Try the challenging "Hard Out Here For a Rooster" difficulty level! Or maybe you've got an itchy trigger feather? Then you may want to check out the "Bigger Threat" level, in which... Well, let's just say, you won't have to worry about sparing ammo.

What are the limitations of the demo?

The main menu especially the difficulty selection is fantastic. Super fun to look at and watch. The game overall was pretty fun! The story was humorous and I had lots of weapons to try out and the gameplay changed enough from level to level that I was interested the whole time and invested in the story. Your game's page is also fantastic and well designed.

Good job getting this far! Can't wait to see what else you guys add! And how the story progresses!

- I want a "BWAK" when I die or something dramatic

- I feel like the music is too tranquil for the type of game (especially the first level) I wanted to be playing a rock metal chicken who is a bad ass, the boss fight on the last level was almost exactly the music I was expecting the whole time

- hit multiple times by the "spark traps" that appear and disappear. Give me IFrames or instakill me like other traps. Also most traps did not seem immediately obvious what they were until I got hit.

- auto reload should be a default setting imo

Let me know if you have any questions to anything I said here!

There is a problem with windows demo: 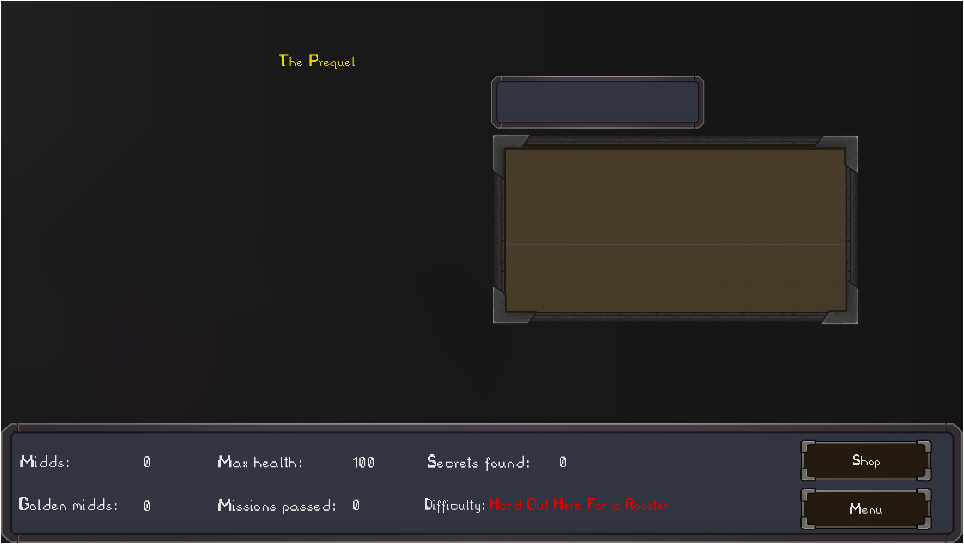 This appears when I start the game on any difficulty.

Thank you for notifying me! Apparently, the build was obsolete for some reason.
What you have to do, is to click on the mission title.

Then the game (especially platforming) is too difficult for me. I think you should lower the gravity, I can't perform the jump in the place where you need to open the door with blue button and squirrel tries to kill you.

Also I think that the demo mission (platforming forest) is a bit unsuitable for the game (kill-everything laboratories and outposts), though I respect your vision on how it should be (I haven't played the game yet, only demo, so honestly I can't know if the demo is suitable).

Also I want to say that I like the game: music, gameplay, dialogs and jokes, the sprites and animations. There are many interesting details, like the chicken rotating its head while I move the mouse.

Thanks, now I hate squirrels.

Oh no, this is all between me and you, leave the poor squirrels out of this!! xd

Thank you very much for playing! I'm glad you've found some enjoyable aspects of the game. I'd like to ask a few questions, regarding the points you've raised:

Lowering the gravity - do you think the chicken should jump higher, or fall slower?

Platforming forest - while, as you say, this is part of the vision, so I will not remove it, I believe there may be something that could be done. How did you feel about throwing stones? Do you think they should be thrown further, to fit more with guns? 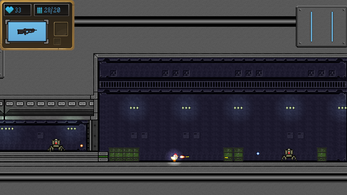 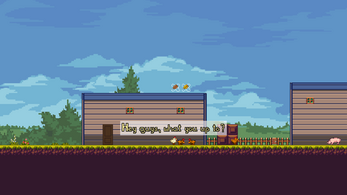 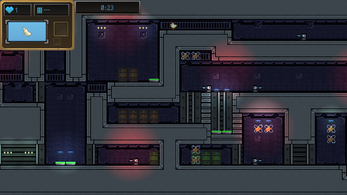 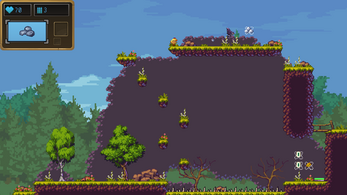